There are very few people in the world who truly know or even understand what it takes to be a successful stunt actor at the highest level.

“You have to be very courageous to perform a lot of these stunts,” said Moneymaker, who stunt doubles for Scarlett Johanssen and has been heavily featured in the Marvel Cinematic Universe, during an exclusive interview with Hayabusa. “Sometimes you go to work and you just kind of have to be tough, a little gritty because you have to get slammed into a wall. And other times you have to really have the courage and have prepared yourself so that you can do something like flip a car, which I've done.

“I've done a cannon roll in a car and it was definitely one of my most challenging stunts and one of the things I needed the most courage and resolve for. I did train a lot as well, but it definitely takes a lot to drive a car down a street, slide it sideways, and then hit a button, blast yourself up in the air.”

Quite frankly, being a stunt woman and actress is something for which Moneymaker was made. She’s prepared her entire life for the high-flying acts as well as for the bumps and bruises that come as a result of punches, flips and occasionally colliding with a wall.

As a kid, her first foray into the stunt world, unbeknownst to her, was hurling her little body off the bed in an attempt to make it to a nearby chair. That didn't end well as she banged her nose against the back of said chair. Despite the commotion and crying, there was no break. Moneymaker’s parents swiftly placed her in gymnastics, which led to a scholarship to UCLA and later catapulted her into the stunt world.

She etched her name into the UCLA record books, becoming the first-ever Bruin to be crowned NCAA uneven bars champion in 1998. The following year she won the NCAA vault championship. During Moneymaker’s time on the team (1997-99) the school won a national championship (1997, the first of seven overall) as well as two Pac-12 titles (1997 and 1999).

“Becoming a stunt woman is something that kind of has to be in your system to begin with,” she admitted. “And for me personally, it really was.”

The training she received at UCLA fostered the ability to embrace the team concept. At first glance, stunts seem a very individual act. It’s your body that’s being hurled into the air or taking that punch — mostly pretending to take it, but accidents do happen. It’s you who careens from the top of a building. No one else.

That overly simplistic mindset doesn’t capture what happens on the set behind the scenes prior to being acted out in front of the cameras.

“I am a big team person,” Moneymaker said. “So being a gymnast my whole life, it felt very individual. Competition was individual, winning was individual. And then I earned a scholarship to UCLA and for the first time, I was able to be a part of a team. I was doing what I was doing for everyone else and so there was accountability there. So for me, being on a film set and working together with my actress or with other actors or other stunt performers or the director and actually creating something that none of us can do individually is something that I think is really important. I think that's something that we can all take into our everyday lives as the team is better than the single person.”

Moneymaker calls the process on set “magical.” Working closely with the actress she’s stunt doubling as well as channeling the essence of the character each are playing. All that makes for a convincing portrayal and harmonious transition when Moneymaker steps in for an actress to perform a stunt.

Scarlett Johanssen, who plays Black Widow in the Marvel movie franchise, told E! News in 2015: "I have a really amazing, amazing stunt team around me. My stunt double, Heidi Moneymaker — and that's her real name — is really incredible, and this time took a lot of the punches for me, literally. This is like our fourth or fifth movie together, so we kind of have a seamless thing between us."

You get used to clenching up and tightening and your body kind of gets used to the feeling of hitting something hard.

To prepare for any of her roles, it is imperative that Moneymaker is not only in shape and taking care of her body, but also sharpening her skills. Her martial arts background is a mixture of Jiu Jitsu, Judo, kickboxing, Kung Fu weapons training, and Mixed Martial Arts.

That combination prepares her for what’s to come on a movie set.

“Combat style fighting/fitness is super important because you get used to, even if you're not getting hit hard, getting punched,” Moneymaker said. “You get used to clenching up and tightening and your body kind of gets used to the feeling of hitting something hard. And that actually helps out because in the real real world of film, a lot of times you're falling down on cement or being slammed into walls and stuff, so that actually does prepare your body for that kind of intense action.”

During many of her training sessions, especially those involving boxing, Moneymaker has used Hayabusa boxing gloves. It’s an experience that has given her a maximum amount of protection and has elevated her striking abilities.

“I’m so glad I have these (boxing gloves),” Moneymaker said. “My boxing game has changed immensely since I started using them. I used to use these little MMA gloves and they really didn't have the wrist support that I needed. Not only do these gloves have amazing wrist support, but they have this great (microfibre) on the side that’s great for wiping away sweat when you’re working out and can’t see. The leather is really a great, durable quality and there’s amazing padding on the end, so I can hit really hard.”

Moneymaker’s stunt credits go back to 1999, but she admitted, early on in her career, some saw her gymnastics skills as a limitation. Instead of landing fight scenes, her calling card, she was used for stunts that essentially only required flips and great athleticism.

She said her first on-camera fight scene came during the filming of “My Name is Earl” in 2007. It was a wrestling scene where she performed a clothesline gainer backflip.

Moneymaker graduated to Iron Man 2 in 2010. In between that time, she performed stunts in films like Mission: Impossible III, Fast & Furious, Ocean’s 13, Charlie’s Angels: Full Throttle, and Spider-Man 3, to name a few.

... she is one of the best stunt performers in the world, PERIOD

“The first real serious fight I did on camera was for Iron Man 2,” Moneymaker said. “First time I doubled Scarlett Johansson, and it was one of my favorite fights to this day. And luckily, I had been working with the team for a long time. John Eusebio was the fight choreographer and fight coordinator and I worked with him for years. So there were probably a few adjustments here and there, but the character itself was perfect for me because she was very acrobatic, and that's my forte. So we did a lot of all this fun Lucha libre style swinging around people, just right up my alley.”

He’s witnessed the consistency in Moneymaker’s grit and determination in person.

"I think it's important to mention that Heidi is more than just the best female stunt performer in the world, she is one of the best stunt performers in the world, PERIOD,’ Rementer said. “And all her talent doesn't come without hard work and determination. She puts in the hours all day, everyday and continues to strive for perfection. She is one of the first on the list of people I would want on my team to work with on any film."

Just as gymnastics became a family affair — Heidi’s younger brother Sean and her younger sister Renae followed in her steps — so has performing stunts. Renae Moneymaker has built an impressive list of stunt work that includes doubling for Jennifer Lawrence in the Hunger Games series. The sisters were able to work together on the set of Captain Marvel where Renae was the stunt double for Brie Larson and Heidi doubled for Marilyn Brett. In a raucous train scene, Brett played a Skrull disguised as an older woman who fought Captain Marvel.

In a way, all the fighting Moneymaker has done on film has been cathartic and has represented the bigger picture of her life. The first six years of her career, she was never viewed as someone who could perform stunts in a fight scene. During her time as a gymnast, she fought through injury and tough competition to make her way to the top.

“I love the word fight because it has so many meanings,” she said. “I mean, we fight every day in so many ways: emotionally, physically. … Everyone always looked at me as a gymnast and there became a point where I thought, ‘You know what, it doesn't matter if I never do a fight on a film,’ which is interesting, because now it's one of my big things I do and one of my specialties. But I thought if I never do a fight scene in a film, I don't care because I get to come in here every day and I get to express all this energy, I get to perform, I get to become very proficient in something that I enjoy very much. So there's so many different aspects to fighting.” 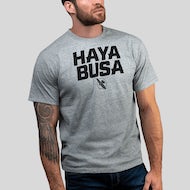